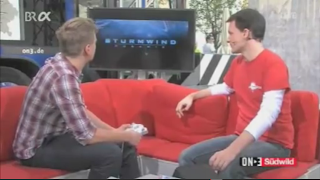 ‪‪Voice: "The Munich-based company "redspotgames" is doing it. Releasing new games for old systems.For the said-to-be-dead-system Dreamcast. "Last Hope" is one of those games. One thats how they used to be popular in the 1990s. Now there´s another one like that being released. Its called "Sturmwind" ("Stormwind"). Again, for the Dreamcast.‬

‪Guy with Cap: "For me, as a retro-gamer, this is great. But will this become a trend? Getting back to old systems?...Hmmm...thats what I had to say, until next time."‬


‪Moderator in the studio:‬ ‪"And exactly this old system is what we have here today, the Sega Dreamcast, and also one of those new games for the old system, "Sturmwind" is the name like we mentioned already.‬
‪November 11th this game will be released, published by redspotgames and our guest today is Max.‬
‪So Max you´re one of the bosses of redspotgames, a company that was founded by you and 4 friends 6 years ago, and your strategy sounds a little strange: You are developing new games for old systems that are not being produced anymore, for example the Sega Dreamcast.‬
‪2001, so ten years ago the system was canceled, yet you´re still making games for it...that doesn't sound like the best marketing strategy...? So please tell me why it DOES work?‬

‪Max: "Well, you have to consider that the current market is being flooded with triple-A titles, the "big games" that are being thrown out for the mass market.‬
‪With the Sega Dreamcast we found a niche for us because, as you said, its very uncommon for a developer to make new games for old systems. And this is why it kinda makes sense for us, but we also do this because of our own ideology. We are retro-gamers ourselves, we grew up with this and we all have the aim to keep the scene interesting."‬

‪Moderator: "So we are asking ourselves: Does this mean we have to dig up all the old systems again...Game Boy, Game Boy color, [...] SNES,...such systems...do we need to get those again?"‬

‪Max: "I hope so! Wouldn't it be awesome if those would be dug up again...you have to consider there's a generation growing up right now that doesn't really know about the Dreamcast, for example...they were not around back then, and I think this is a lack of knowledge in my opinion, as it would be to just forget about many of the older systems."‬

‪Moderator: "So you´re saying for many its not about remembering and getting back to the old systems, but also getting to know them for the first time?"‬

‪Max: "it can be both...on online trading platforms you can buy used systems and games for low prices, or you can just buy new games for a system you didn't use in a long time."‬

‪Moderator: "So back to the Sega Dreamcast, tell me why is this thing so great, why did you pick this one?"‬

‪Max: "Various reasons. I myself have been playing since the 80s, used to be more of a Nintendo-kid than a Sega-kid, have to admit that...quite a few years passed by until I discovered the Sega Dreamcast. But looking at all the years I have been playing console- and PC-games, this was the one that simply "flashed" me the most."‬

‪Max: "The combination of the innovative elements, for example it was the first console with a build-in modem, DCarena used to be something like XboxLive of past years, and also the innovative software...there have been many innovative games, very unique games that caused a little revolution of how we understand, see and design videogames."‬

‪Moderator: "In the beginning things were quite good for Sega and the Dreamcast, but then they ran into one problem: The Playstation2 was released and kinda destroyed the whole market for them. So Sega said okay, we cant compete with this, lets cancel the whole thing"...kinda shows how fast-paced the industry is, how fast things can change. To what extend is it sort of a protest against this, on your side, to release new games to say "No, we don't want this to end so fast?"‬

‪Max: "Well...protest...not sure if its a protest...gotta really define that word first...its not protest by means of trying to show others that we have the bigger balls. Its just that we wanted to do something by ourselves, and we said "if WE don't do it, if WE don't continue to make games for the Dreamcast, who´s gonna do it instead!?" And also..yeah, you´re kinda right...we were getting kinda annoyed about the fact that during the last 10 years or so games have become way too generic, everything's being made the same, not much is sticking out of the mass, no innovation."‬

‪Moderator: "So why is the gaming-mainstream-industry doing this, why don't they bring innovation, why don't they have the guts to try something new, instead of continuing old concepts, knowing that it will sell?"‬

‪Max: "Well, I don't wanna say the WHOLE industry is doing this, because there are exceptions, but uhm why they are doing it? Because they have to make money, no question. Its become a million, billion dollar business that's bigger than Hollywood by revenues. And its simply the danger behind it, companies that go broke. Acclaim went broke just a few years ago. A company that has been around for ages...it can happen SO fast, its become so fast-paced, as you said, and because of that the companies, big companies, have to go the save way."‬

‪Max: "Bad timing, we gotta reboot the game, but during that you could already ask questions..."‬

‪Moderator: "How come we have to restart? Is it because the Dreamcast is so outdated?:lol:"‬

‪Max: "HA HA HA no its just because you already started showing a screen of it that wasn't what we see here...tell you about it later."‬

‪Moderator: "So what about Sega...you´re making, publishing games for a company that you don't really have anything to do with...what is Sega saying about new games suddenly being released for the Dreamcast?"‬

‪Max: "Gotta correct that, we dont do anything for Sega, we develop and publish on our own...I guess what you´re saying is if we need a license....in this case we don't because we have an open devkit that is freely available on the internet, so we don't use any libraries, no codes from Sega, but our own. And what Sega says about that depends on the single personal opinions of people from them. Sega cant say anything officially after having dropped the Dreamcast. Its a "respecting", and a "mentally supporting", but officially there cant anything be done."‬

‪Moderator: "So reactions from Sega are positive, why would it be negative, they´ll be happy to see games still being made for it..."‬

‪Moderator: "So, now here we have the game...Sturmwind level 1, I´ll start very easy and see how far I can fight my way into the game. The idea is pretty basic, you got this spaceship and you gotta shoot everything that comes at you..." (Max: "right")‬

‪Moderator: "Now...we´ve seen that before...I remember, Game Boy and such, we´ve had that back then already...fly or drive left to right and destroy things..."‬

‪Max: "The indie-character" about it is most of all that its been made by only two persons....started as a private project...8 years ago they thought "hey, lets make a game of our favorite genre, and lets add some unique elements that WE would like to see"....Also there are NO other companies involved...so no rules about how the game should be."‬

‪Moderator: "34,95 (euros) will be the price, released on November 11th (ndzouzzz : ahaha la déconne)....why should I ultimately buy this if, in the end, its "just another shooter"?"‬

‪Max: "Well, why should I buy new racing games if, again, all I do is drive around in cars? ;)‬
‪You should buy it because its for the Dreamcast, because it was developed to push its hardware.‬
‪It its, so far, the best looking indie-game...its got 16 levels, over a hundred smaller and over 20 bigger bosses that fill the whole screen, which is quite the horde to destroy, on any system."‬

‪Moderator: "So how about the influence of indie-games on the big companies?"‬

‪Max: "Good question, that's a little more difficult...as an indie-musician for example its relatively easy and less expensive to make your own music and get it out to the people...in the gaming industry its still a very expensive and time-consuming thing to do..."‬

‪Max: "I think so...a little, at least...before this company was founded there was no WiiWare channel, or Xbox LIVE Indie Games, and there´s been quite the retro-wave,...so maybe, who knows."‬

‪Moderator: "Okay, Max, thanks for coming, thanks for introducing us to the retro-scene..."‬ 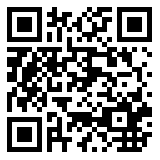